How to play guide of Albedon Wars

Albedon Wars fights are turn based matches between two squads of four units.

Each battle takes place on a battlefield of 4 different zones which grant strategic bonuses to the side that controls them.

Both players activate their units and play their cards to gain control of the zones and defeat their enemy.

Both players draw 3 cards and can mulligan up to all of them.

Players secretly marshal their units in the external zones.

The player who controls the upper zone wins initiative[1].

As soon as a player reaches 10 points[4] the game finishes immediately.

The player who reached 10 points is the winner.

There are four zones in each game.

There are many types of zone.

Each zone provides some benefit to its controller in the Collect phase.

The board is divided in 4 zones: Icons are inherited from the lines of power of the unit.

The icon on the left and on the right become buttons during combat, which can be used to attack and/or activate a special ability.

The central icon is given by the choice of the racial permanent bonus.

Icons describe the "nature" of each power and card.

In order to play a card, a player needs to control a unit with that icon on the battleground.

It's important to notice that it will be a unit that with channel the card, not the player.

The most effective unit (in terms of bonuses) is chosen automatically. 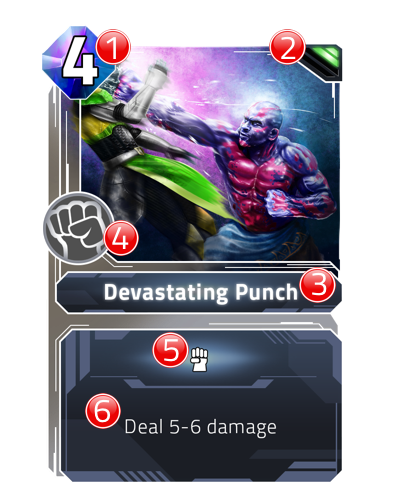 In the center there are the name (3) and eventually the icon (4).

Then, in the bottom box, there are the range (5) and the description of the effect (6).

The range has to be calculated from the channeling unit, which is highlighted during the dragging of the card.

Cards and powers can have a range.

Cards and powers can also affect a whole zone. In that case, the range is surrounded by colored arrows.