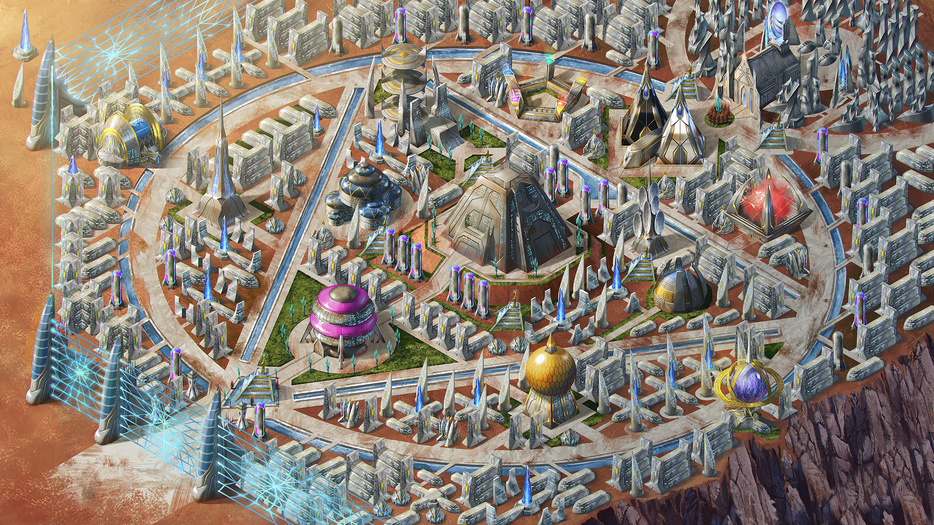 Back on their home planet, the Vertu already had astounding intellectual and technological abilities, but were unfortunately endowed with delicate bodies that had problems adapting and needed much care and attention. For this reason, they were guarded by their pets, the majestic symbiotic marsupials called Yanima.

When the Vertu landed on Krenus, only some of these matchless creatures still survived, putting the fragile Vertu in great difficulty. Some of them, the more enterprising ones, not only discovered a lava channel that crossed the mountain range to the North East, they sought refuge on that slope of Krenus to create one of the most fearsome races of all: the Zekians.

Others, more prudent and empathetic, remained in the central part of the region together with those Vertu who lived without any Yanima to help them adapt. Here was founded the Adenian lineage, which was to enjoy great fortune. The Vertu who first reached the promontory to the south – which they named Kethaios, in fact baptizing the whole region accordingly – ultimately founded the lineage of the Untouched.

Once their Yanima had lost their functions as a body-host, they created bio-technological equivalents thanks to newly discovered Synean technology, realizing their own remarkable exoskeletons. And it would be none other than the Untouched who would finally learn to reset and partially reprogram the Keitunian, training them for other tasks. Thus were born the Keitunian R.

Back on Nolaos the social organization of the Vertu had already been divided into a caste system to which individuals belonged from birth. Mating outside this restriction was totally taboo, so that any cross-bred children were either killed at birth or cast out of society. The castes are the:

THE CREED OF THE SPHERES[]

All of society, from the point of view of tasks and roles, is based on the CREED OF THE SPHERES which attributes to the influence of the celestial orbits and their essence the power to determine events. Events are thus divided – for their effect – into heavenly (cosmic and planetary) and Krenestri (local impacts and those on living beings).

Regardless of the lineage (Adenian, Zekian, or Untouched,) an individual can be under the influence of one star or another, even though, depending on the race, the probabilities of affinity differ.

There are three Spheres, equivalent to as many stars – which the Vertu recognize an affinity with:

THE GOVERNMENT AND ITS ORGANS[]

In command of Vertu society is the Queen, who can be of Peace or War depending on the socio-political situation of the moment, but who can only belong to the Adenian caste. While the Queen Regent is governing, the other Queen deals with minor issues and remains vigilant over the circumstances, in a more or less latent conflict with the reigning Queen via a sort of Shadow Government.

The reigning Queen flanks the Kalenda, or Grand Judge, traditionally male, selected via an Ordeal of Submersion in a Sacred Well of liquid Albedonite, who oversees the administration of justice according to the Creed of the Spheres.

The Vertu Albedonite hunters are a branch of the army, led by the Queen Regent, Kaleeria.

Anyone can leave his or her job to become an Albedonite hunter. Inside the faction are mostly enrolled and regulated volunteers.

They are paid regularly by the army for special highly risky missions and are remunerated instead by the central government for missions of a delicate and private nature. Even if the Seekians are in general respected and feared, in every race the reasons for enlisting are different. In particular:

The Adenians: are usually volunteers, driven by their own economic or social ambition. The Untouched: are commanded by the hierarchy above them and are often enlisted as spies from among the Seekians of other races. The Zekians: volunteer out of a lust for power and money. The Erratics: enlist to climb the ranks of society and to also maintain their families.